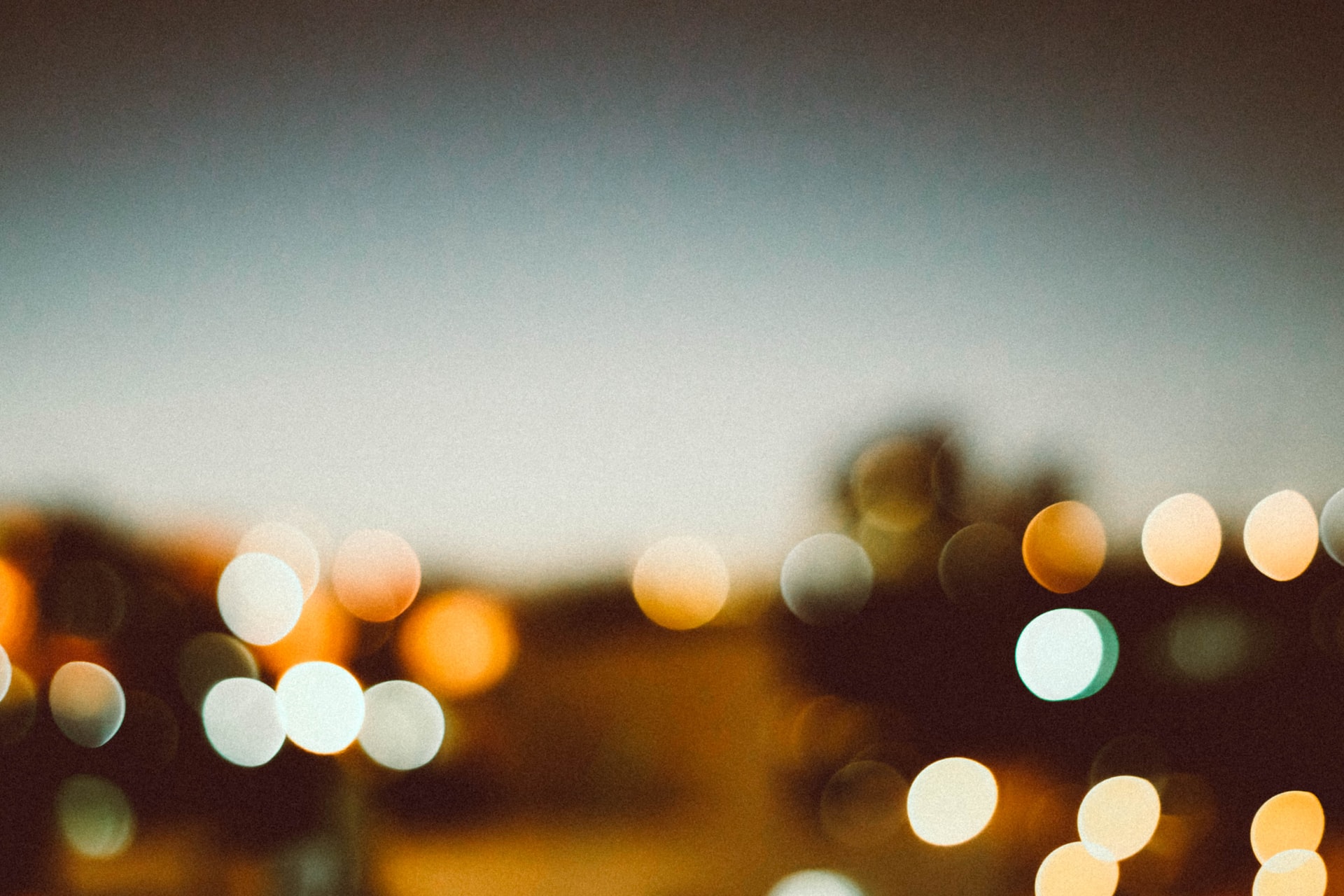 When the Xbox Kinect first came out about 10 years ago, I was fascinated by the technology and the interesting things people were doing by connecting the Kinect to their computers. But, I had just recently become a father for the second time and — with my limited free time — couldn’t justify the $150 price point, so I never picked one up.

Fast forward almost 10 years, and I came across a Kinect that had been sitting in a box for the past five years and an owner who had no issues letting me borrow it. I enjoyed numerous hours playing Kinect Star Wars with my boys, but then I remembered my original draw to the Kinect: connecting to it and controlling it via a computer. This led me on a journey that touches on Elixir, NIFs, Kinect, and Phoenix LiveView. The Kinext library and the Kinext LiveView demo app were the result of that journey.

This blog post follows that journey, but is not an in-depth guide for NIFs or Phoenix LiveView.

OpenKinect is an open community of people interested in making use of the amazing Xbox Kinect hardware with our PCs and other devices. We are working on free, open source libraries that will enable the Kinect to be used with Windows, Linux, and Mac. The OpenKinect library (libfreenect) provides the ability to interact with the Kinect directly via the C language. It grants access to the tilt motors, LED, audio, video, and depth sensors. libfreenect has been around for many years, and wrappers for the library exist for a number of programming languages, but (prior to this journey) not Elixir.

Elixir cannot directly call C bindings, so to access libfreenect from Elixir, we need to bridge the gap using Erlang’s Natively Implemented Function (NIF) feature. NIFs are powerful because they enable you to write C code and load it into the Erlang Virtual Machine, allowing any native action to be performed from Erlang/Elixir; however, they also bring all the dangers of C with them including the ability to crash the entire Erlang Virtual Machine.

The Phoenix Framework allows you to “build rich, interactive web applications quickly, with less code and fewer moving parts.” When it came time to create a simple app to demo the functionality of Kinext, Phoenix LiveView was the obvious choice. It took ~45 minutes from running mix phx.new --live to having all the functionality on display in a simple interactive web page.

The first step in the Kinext journey was to explore the OpenKinect library and make sure it was actually feasible to use it for this project. I had to pick up a USB adapter to connect the Kinect to my laptop. After running brew install libfreenect and brew cask install quartz I was able to validate the connection to my Kinect via the freenect-glview utility.

With the connection from my computer to the Kinect validated, the next step was to figure out how to talk to the libfreenect library from Elixir via Erlang NIFs. I created an Elixir project named Kinext, and after reading a number of guides online, I implemented the skeleton of the NIF process for the first function I would need: freenect_init, which creates a context that I could use to reference the libfreenect environment.

The actual function in C shows some of the things you need to do a bit different when interacting with NIFs (Github link): 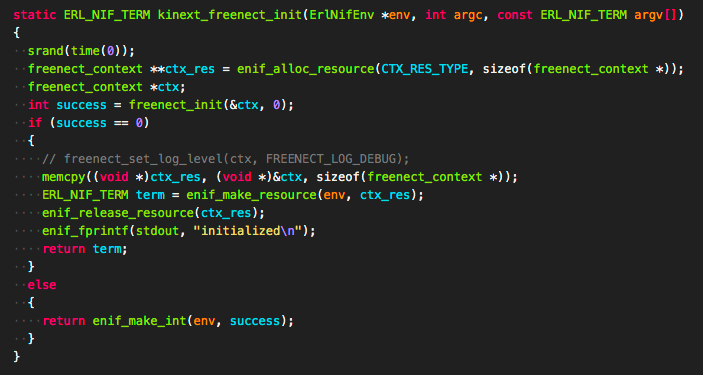 As seen above, calls into a NIF are given two different arguments:

When passing things back to Erlang/Elixir from a NIF, one would normally encode the data into a normal Erlang term. This works great in a lot of cases, and enables you to keep working with the data from the NIF in the Erlang/Elixir program.

There is, however, a problem with doing that in this case.

The libfreenect library exposes several things as pointers to opaque objects (e.g. context and device). In the libfreenext library, these contain any data the library needs to communicate with the hardware itself. Because they are opaque to us, there is no way we can encode them into a normal Erlang term.

Luckily, the NIF API has a feature designed for exposing things like these to Erlang/Elixir, called Resources. Resources can be encoded into a term inside a NIF function, returned to Erlang/Elixir (where it just looks like a normal Reference), and later decoded into the original data in another NIF. This enables us to return these opaque objects from the libfreenect library safely, then use them later in other NIFs we pass them to.

Resources are useful because they do not require you to encode and decode the underlying data structure when passing to Elixir — they are just a pointer. In this case, we call freenect_init to initialize the context, then copy that into a resource allocated via enif_alloc_resource, and created via enif_make_resource. We can then return that resource, and the NIF will hand it back as a Reference to Elixir. We see the NIF defined from the Elixir side of things here (Github Link):

You notice that its spec matches the returns from the C function: either the reference or the integer error code.

As you can see, the actual function body in Elixir throws an error by default. When the file is compiled, the NIFs are loaded and (if successful) replace the error throwing version of the function body with the call to the NIF. This magic is outlined at the top of the Elixir module Github Link: 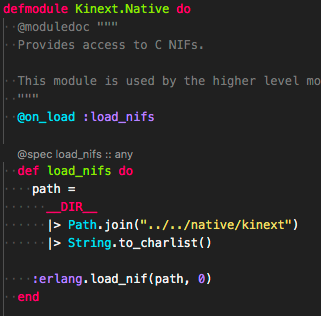 We can now take that Reference, representing a libfreenect Context, and pass it back into the “freenect_open_device” function (Github Link):

The way I decided to handle this was to have the initialization function take and store an Elixir Process PID, and have the video callback function send a message to that PID with the video frame when called. Side note: this is currently implemented with a global variable in the C code, so you can currently only run one video context at a time.

In the send_data_to_pid function, which is called by the video callback, we take the raw RGB data and convert it to PNG via the svpng function (huge thanks to fellow DockYarder Jason Goldberger for helping me fumble through C for the first time since that one college class on OpenGL almost 20 years ago). We store the PNG in an Erlang binary via enif_make_new_binary, then send it to the video callback pid via enif_send. (Github Link): 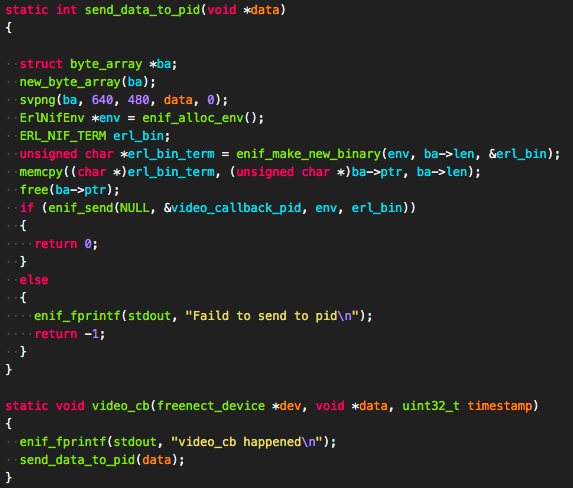 And on the Elixir side of things, we spin up a simple listener GenServer when the video context is created, passing its pid to the kinext_start_video NIF. When we want to get a frame, we call the freenect_process_events NIF, which triggers a frame to be sent to, and stored in, the listener GenServer, and then we get the last frame from the listener (Github Link): 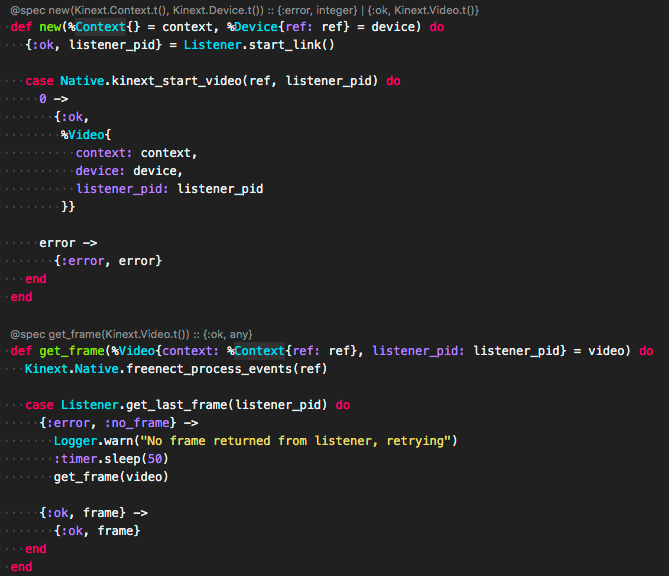 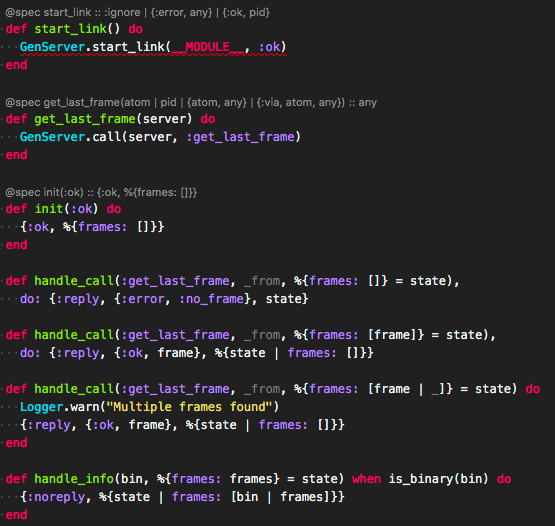 The Demo App in Phoenix LiveView

At this point, I finally had everything working, but only from the command line via IEX. As I mentioned above, my interest was in getting Elixir connected to the Kinect — I have no current plans to build something interesting on top of the library. I am hoping someone else in the Elixir community might take that challenge on! I did, however, want to have a demo app that did more than simple command line interactions. In thinking of the options I had before me, Phoenix LiveView came to mind as the simplest and fastest way to put a UI on Kinext. This proved true, because about 45 minutes after running mix phx.new kinext_live_view --live, the full demo app was running: 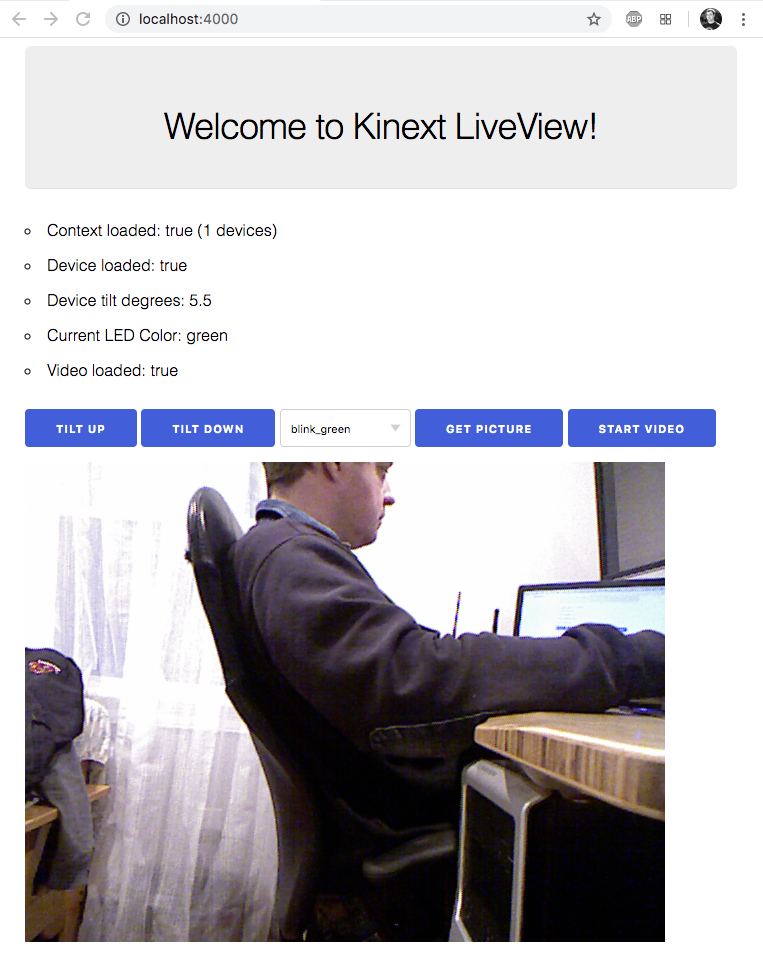 The picture frames are displayed using the html “Data URL” functionality, which allows you to embed an image directly in the src field of an img tag. Since we have the frame already as a PNG in the assigns, we simply Base.encode64 the frame and use that encoded data as the src field of the img tag (Github Link):

Given that the images are about a megabyte each, this is an incredibly inefficient way of handling “video”, not something you would do in production. That being said, the responsiveness of the “video” on my local machine was really good, almost on par with what I would expect in a regular video chat.

Where to go from here

As mentioned above, my intention with Kinext is to provide and support a library for the community to use. Where the project goes from here is up to the community, but I will continue to support it. If you are interested in developing for the Kinect in Elixir, pick up a Kinect Sensor and a USB Adapter and go for it. Please let me know how it goes via Github Issues (for the bad) or Twitter (for the good).